Insiders at public companies are selling the stock at the highest rate in recorded history amid near-record high valuations and the S&P 500 at all-time highs.

But, should we be concerned? After all, most insiders are rewarded shares by their employer and sell them to buy a boat or a Corvette. They’re employees, not stock traders.

This Peter Lynch quote about insider trading comes to mind:

“Insiders might sell their shares for any number of reasons, but they buy them for only one: they think the price will rise.”

Investors typically use this quote to shrug off some troubling Form 4s coming out of one of their investments. But this is a much bigger problem. It’s market-wide, and corporate insiders aren’t buying their shares in nearly the same quantity.

One of the most demonstrative sales recently was Elon Musk, who publicly contemplated whether or not he should sell billions of dollars worth of his Tesla stock. Spoiler alert: he cashed in.

Even more, corporate insiders, especially those in the C-suite, are surprisingly good traders of their stocks. Following their trades over the years is a winning strategy if applied correctly.

Viewed in aggregate, corporate insiders are bearish, in fact, the most bearish they’ve been in several years, with their cumulative sales 79% above the 10-year average, according to InsiderScore.

Here’s a chart provided by Jesse Felder, who flagged this worrying trend recently. 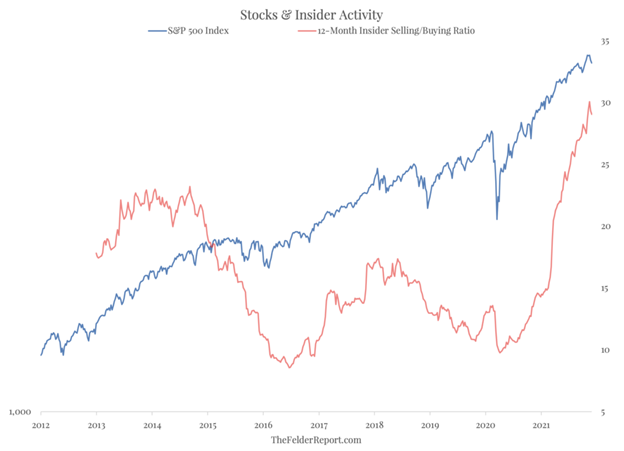 The number on the axis that reads 30? That’s the ratio of shares sold to purchase. In other words, insiders sold off nearly 30 shares for every one share they bought over the previous 12 months.

You can’t simply hand-wave away the fact that corporate insiders are dumping loads of stock on the public. You can’t spin it as bullish. Regardless of the unique situation, we find ourselves in today’s market; the fact is that this has been an excellent market timing indicator historically.

With that said, there is a counterpoint worth mentioning: stock-based compensation. Many employees of growth companies receive a large portion of their salary in stock and options, and this number has been increasing, especially in the software sector, which, as we know, has been the hottest sector of this bull market.

Alliance Bernstein published some data on this, showing that the average Russell 1000 software growth stock pays out 8.6% of their sales in stock-based compensation.

Furthermore, SBC in growth stocks (which have decimated value stocks in returns throughout the bull market) in general is rapidly growing, putting shares into the hands of many employees who want the cash so they can go to Hawaii or buy a summer house. 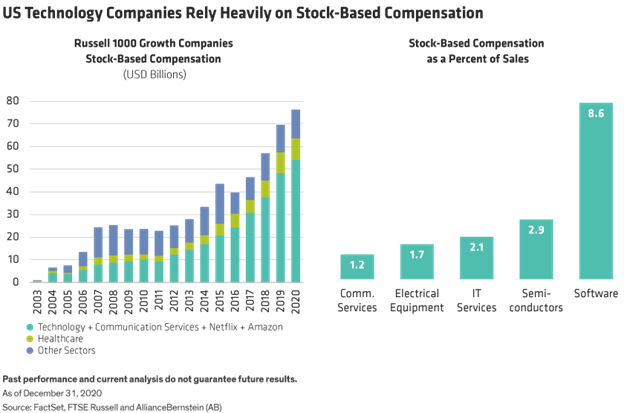 If you wander into SaaS Twitter, you’ll find people discussing their strategy on how to land a job at a rapidly growing SaaS firm with a favorable stock-based compensation package so they can take advantage of the bull market in tech stocks.

This is a clear phenomenon in the tech sector abroad that isn’t captured in the raw insider trading data.

Why This Is Significant

Broadly speaking, firms that insiders are buying shares of outperforming those that they’re selling shares of, to a statistically significant degree.

So the raw signal displays a pretty sizable edge on its own. This is a good sign, as if the raw signal doesn’t provide any edge, we don’t want to try to optimize it and choke the data until we find something that looks like an edge.

Common sense says that if we simply take the broad edge and apply some logical filters to it, we should get an even better outcome. One of the biggest impacts to performance is the “identity of the insider.” The SEC divides company insiders into four categories:

You can see where we’re headed here. Applying a few common-sense filters gets you more and more granular and provides more of an edge.

By now, I hope you’re convinced that there is a lot of signal to insider trading data, and when we’re at such elevated levels as we are now, it’s worthy of your caution.

They say markets climb a wall of worry. When everyone is bullish, there’s nobody left to buy, and vice versa. A bull market needs a constant source of fear to keep some investors on the sidelines until they reluctantly join the party.

This worrying data is just one of several factors keeping bulls on their toes.

Coupled with rising inflation, talks of an energy crisis, the Fed chairman calling asset valuations “elevated,” weakening market breadth, and record levels of leveraged speculative trading, the bears have plenty of narratives to fall back on when they’re leaning on that sell button.

Is this a sign of an imminent collapse in equity prices? Who knows, but throughout this bull market, there’ve been countless red flags to which the bulls have given a bloody nose and moved on from.

I’m always hesitant to read too deeply into any given development within a bull market. You never really know which one will topple the whole thing, so you might as well just let price action do the talking.

With that said, this is worth filing this one away for later use. Should the bull market crack in the near future, there’s likely a lot more air to come out of growth stocks with high insider selling and elevated valuations.

#18 The First Crack: Why the Market Crashed Last Week

#9: Last Week of the Year: What to Expect