“Losers quit when they fail. Winners fail until they succeed”.–Robert T. Kiyosaki

THE SECOND ROUND OF STIMULUS – WHAT DOES THIS MEAN?

President Trump has officially signed a second round of stimulus checks to citizens as part of the coronavirus relief package. This second round of direct payments does come with a few fundamental changes, though. In the first round of funding, eligible households received $1,200 per adult and $500 per child. This time around, we see a decrease to $600 per adult and an increase to $600 per child. These changes apply to individuals with gross income under $75,000 and married couples under $150,000 based on their 2019 income. All of these changes are expected to happen relatively quickly, as the IRS has started sending out payments via direct deposit as of December 29th. Treasury secretary, Steven Mnuchin, states that all taxpayers who have current banking info with the IRS will receive direct deposits by January 4th. With nearly a third of Americans reporting that they are struggling to pay their bills due to the pandemic, this is undoubtedly welcome news, despite failure to push through legislation to increase direct payments to $2,000 from $600.

COVID-19 RELIEF BILL
House Representatives passed the updated Covid-19 relief bill with increased payments from $600 to $2,000, and the bill now includes college-dependent students. This all seems to be not due to the Senate’s expected vote to decline the increased Stimulus. This re-vote was all based on President Trump initially declining the first round of stimulus funding in favor of the larger package.

In other news, Boeing had its first flight with its controversial 737 Max from Miami to LaGuardia after 21 months of being forced aground after two fatal crashes. This comes after nearly two years of the plane being grounded and facing harsh regulations from every aviation agency across the globe. With Boeing able to fly this plane, we can begin to see Commercial Airlines begin to purchase and renew contracts for the 737Max.

Ant group is facing harsher regulations from the Chinese government as they want to hold Ant Group’s finances in a holding company. China is using this as a possible way of increasing domestic consumption by having raised consumer loans. They want to use Ant group finances to provide funding to citizens, which in turn will then increase at-home spending.

And finally, the United Kingdom approved the third vaccine from AstroZenica to combat the notorious Covid-19. AstraZeneca has partnered with Oxford University to create this vaccine, and it has reached the minimum efficacy needed to push forward for implementation. This approval is only within the United Kingdom and needs to go through trials within the United and be approved by the Food and Drug Administration. The United States is skeptical of the AstroZenica vaccine as they have had several missteps along the way and need to re-prove their credibility to the United States marketplace.

The head of Ontario’s COVID-19 vaccination program has requested that Health Canada, the department responsible for the country’s federal health policy, delve into the feasibility of administering Moderna’s two-shot vaccine in a single dose. General Hillier (Ret.) cites a desire to increase efficiency in helping citizens. Notable health officials have expressed that there is a lack of evidence to suggest merit to this idea. If this idea gains traction and is proven to be effective, the implications are significant as it will lower the time necessary to inoculate and protect the population, effectively lowering the rate at which coronavirus will spread.

In other news, there may be major international shipping disruptions in 2021 due to a law signed in 2018 that comes into effect. Over 180 countries and territories are not in compliance with the 2018 Synthetics Trafficking and Overdose Prevention (STOP) Act. The bill’s purpose was to combat the opioid crisis and stop fentanyl shipments through the USPS by providing advanced electronic data, or AED. AED provides USPS and Customs and Border Protection with information about international packages’ contents before reaching the United States. Country waivers are available, but only to countries without the technological and financial capital to properly comply with it, only 10-15% of the total volume. 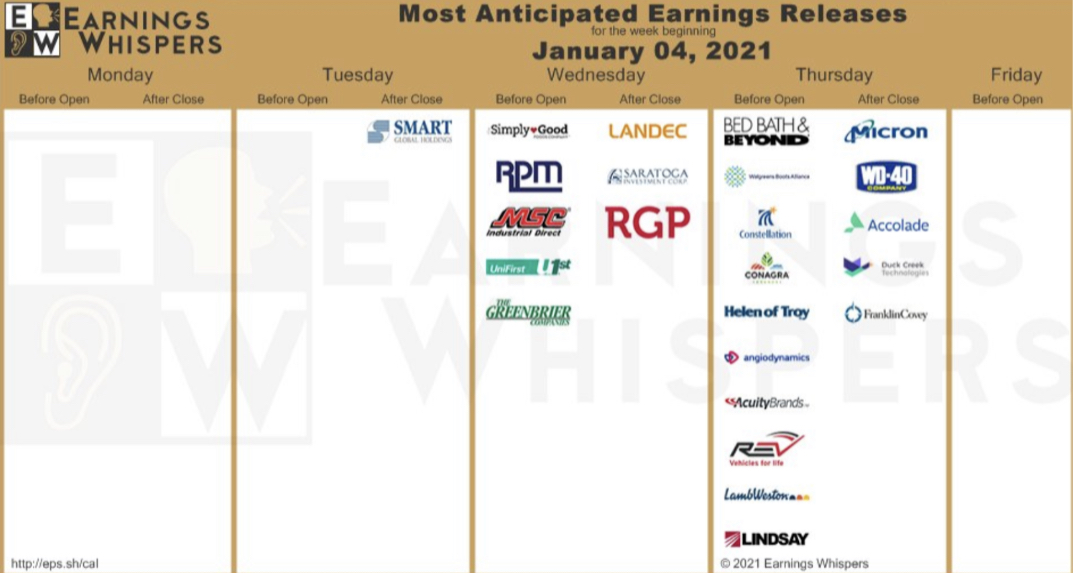 Bed Bath & Beyond
In a year when home improvement and retail therapy have run rampant across the United States, Bed Bath & Beyond has a stronghold in that market. Beginning in Q3-2020, $BBBY began to pivot its business model from retail to a digital-first company. They will be closing over 200 stores within the next two years with this strategy to save money. They have an expected EPS of $.31 and revenue of $2.77B and have expected quarterly earnings of -155%.

Walgreens Boot Alliance Walgreens is a retail drugstore chain that sells prescription, non-prescription drugs, and various household items. With a consistent decrease in in-store visits and pivot to online sales, Walgreens will continue to tumble on its earnings reports. Estimated EPS of $1.02 and Revenue of $34.89B, with expected Quarterly earnings of -25.5%.

Micron Technology
Micron Technology is one of the world’s largest and leading semiconductors and data storage providers. They have shown consistent downtrends in their last three years of annual reports, including lower revenue and net income. They have an estimated EPS of $.80 and Revenue of $5.73B, and their expected quarterly earnings are expected to increase by 42.9%.

We finished the year strong.

We had a total of 22 trades in the 4 day trading week, with 18 of those trades being profitable.

We will continue to focus on companies in the Electric Vehicles Industry in 2021.

We have also improved our discord experience by adding more bots to the server at no additional cost to our members.

Provides the team with options sweep. The team’s sweeps are used to note what stocks are getting a lot of attention and have the potential to make a big move towards the upside or downside.

Join the team to see how we will use this information to improve our trading.

“Always be ready for the next move.”

Straddling is a conservative trading strategy that consists of buying both calls and put option contracts for security with the same strike price and expiration date. Straddling is an attractive option because you don’t need to accurately predict price direction as you are poised to benefit from a sharp move in either direction and can sell your incorrect position at a loss once the direction is confirmed. This strategy provides a built-in hedge, but you do stand to lose on both positions if a move fails to happen. So the next time you find yourself wanting to test your thesis on a big move, consider straddling to protect your investment.

Newsletter 11 : Who Gives a Fuck? Stock Market All Time High