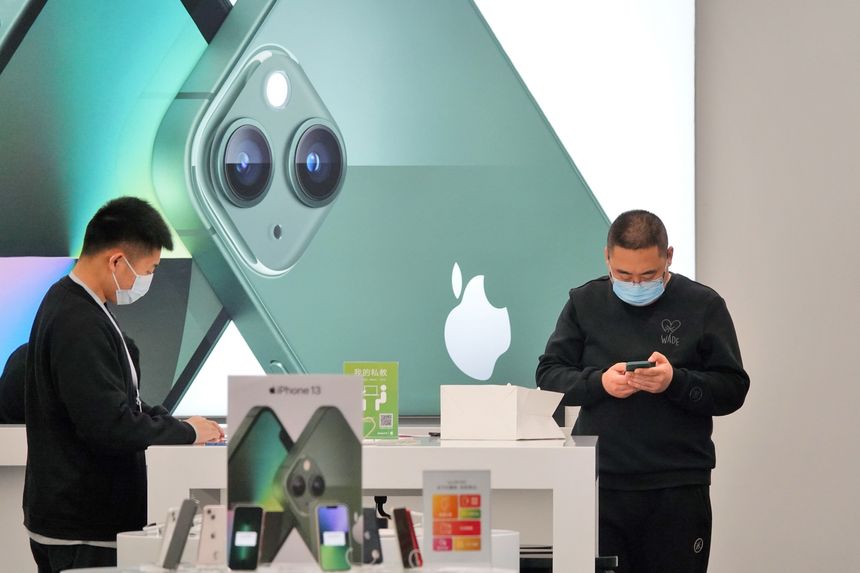 The better-than-expected results for the quarter ended in June followed a pattern of tech companies that posted a drop in profits but managed to assuage investor concerns about their strength in uncertain economic times.

Investors were encouraged by Apple’s results even as they continue to pay close attention to the potential effect of a strong dollar, inflationary fears, chip shortages and Covid-19 precautions in China.

“We are seeing some pockets of softness here and there,” Tim Cook, Apple’s chief executive, said in an interview Thursday. “But in the aggregate, we expect revenue to accelerate in the September quarter as compared to the June year over year performance.”

Apple shares rose by more than 3% in after-hours trading. Amazon.com Inc. shares were up by more than 12% after hours after the company said revenue was up about 7%. Earlier in the week, Microsoft Corp. MSFT 2.85%▲ and Google-parent Alphabet Inc. GOOG 0.87%▲ reported April-through-June results that fell short of Wall Street expectations but showed investors that the companies are well-positioned to weather a recession.

Apple on Thursday reported that profit fell to $19.4 billion, the worst quarter since the July-through-September period in 2020 ahead of the 5G-capable iPhone launch. On a per share basis, the Cupertino, Calif., company’s profit fell to $1.20 from $1.30 a year earlier. Analysts surveyed by FactSet, on average, predicted earnings per share of $1.16.

Revenue rose 1.87% to a new fiscal third-quarter record of about $83 billion from $81 billion a year ago. Analysts had predicted a 1.7% rise.

IPhone sales, which are Apple’s biggest driver of revenue, rose 2.8% to a fiscal third-quarter record of $40.67 billion, while analysts had expected a 2.5% drop. Sales of iPad tablets, Mac computers and wearables were affected by supply constraints, Mr. Cook said.

“There is no obvious evidence in our data that there is macroeconomic effect on iPhone sales,” Mr. Cook said. “On iPad and Mac, frankly, we didn’t have enough data from a supply point of view to really test the demand.”

Apple is seeing signs of the economy affecting sales in its wearables category and among some services, such as ads, he said. The company expects supply constraints to improve in the current quarter compared with the previous one.

“As we look to September, eyes are on FX [foreign-exchange] impact and any signs of a demand slowdown ahead of the iPhone 14 launch,” longtime Morgan Stanley analyst Katy Huberty wrote in her final note about Apple to investors, after being promoted to a new role.

In late 2020, Apple introduced iPhones with 5G capabilities that were touted as offering faster internet speeds to improve gaming and downloads, helping spark renewed interest in the gadget and fueling a record fiscal 2021 profit of $94.7 billion. Analysts are predicting iPhone profit for fiscal 2022, which ends in September, will be near $100 billion after a strong first half.

China, which has seen strict Covid-19 shutdowns, was expected to be a drag on Apple’s results after helping fuel record growth.

China, which has seen strict Covid-19 shutdowns, was expected to be a drag on Apple’s results after helping fuel record growth. Apple had warned in April that Covid-related supply disruptions around Shanghai and silicon shortages would hurt the company’s inventory and hinder sales by between $4 billion and $8 billion. Chief Financial Officer Luca Maestri also had warned that foreign-exchange rates and paused sales in Russia following the war in Ukraine would also limit growth.

On Thursday, Mr. Cook said those constraints were “slightly less” than what was predicted.

Other U.S. companies with heavy exposure to China have already shown how those shutdowns have hurt their businesses. Tesla Inc., TSLA 2.21%▲ for example, last week reported its first sequential decline in quarterly profit in more than a year following an extended shutdown at its Shanghai assembly plant, while General Motors Co.’s GM 3.06%▲ China operations helped send profit down 40% in the quarter.

In recent days, Apple has taken the unusual step of discounting iPhones in the China market.

Goldman Sachs estimates that iPhone China shipments improved in the month of May compared with April, when they fell 39%. “Our checks suggest an even stronger sales momentum in June as lockdowns were further reduced, likely driving realization of pent up demand,” Rod Hall, a Goldman Sachs analyst, wrote in a note to investors this month.

Mr. Cook said the company is seeing inflationary costs in wages, logistics and certain silicon components. The company finished the previous fiscal year with 154,000 employees, according to a regulatory filing.

“We are making deliberate decisions about where to invest our money, but we’re continuing to hire, but we’re just doing it in a very deliberate way,” Mr. Cook said in the interview.

5 economic forces behind the Fed’s next rate hike decision